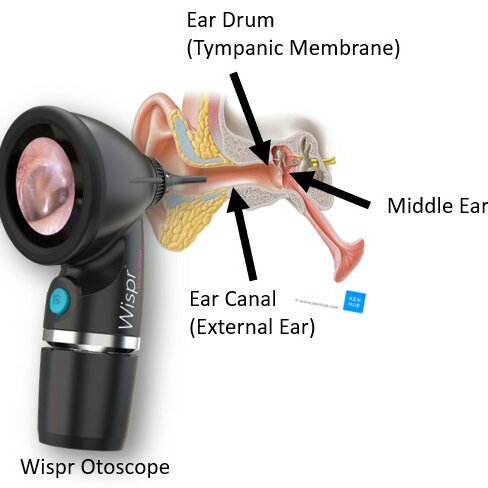 Normal Ear Anatomy
The human ear is an example of nature’s amazing bioengineering. It translates sound waves first into mechanical motion and then into electrical signals that are interpreted as sound by the brain. The otoscope can “see” the tympanic membrane (eardrum) which separates the external ear from the middle ear. Because the eardrum is thin and translucent, it is possible to see some of the structures of the middle ear. These structures include the bones of the middle ear along with the tympanic cavity. Understanding what a normal eardrum looks like will allow you to appreciate when something is not normal. Orientation of the ear compartments

In this article, we will show you the features of the normal ear that you can expect to see during otoscopy. All the images and videos shown are from the WiscMed Wispr digital otoscope. To see the features, you must be able to obtain a view of the tympanic membrane (eardrum). The ear drum is located about 1.5 cm inside the skull at the end of the external auditory canal. The canal is rigid (surrounded by bone and cartilage), but it is not straight.
The canal often has ear wax (medical term, cerumen) that either partially or completely obstructs the view of the eardrum. The first challenge is to navigate through the external canal and past the ear wax. Below is a typical view that you might get with a traditional otoscope. Only a small portion of the eardrum is visible because the ear canal is partially occluded by ear wax. No definitive statement may be made about the ear drum because such a small portion is visible. To properly see the entire eardrum, either the ear wax must be removed, or you need to use a digital otoscope that allows you to guide a camera around the wax. Removing ear wax for the inexperienced provider is challenging. This is because 1) the small canal limits visibility, 2) the canal is sensitive, and 3) there is risk of damaging the eardrum without good situational awareness. A better alternative is to have an otoscope that is capable of maneuvering through a small “window” in the wax. Here is a video of a digital otoscope with a distal camera that is able to maneuver past wax;

Maneuvering past wax in a 9 year old

Once you obtain a view of the tympanic membrane, you can begin to appreciate the anatomy that is apparent. Let’s start with the features that are readily observable. The first thing you notice is the large circular area. This is the tympanic membrane (eardrum) and is often described as pearly gray. In an adult, the eardrum is about 1 cm in diameter. A healthy ear drum is concave inwards. The cone of light is seen on a healthy eardrum – it is from otoscope light reflected from the concave surface. The cone of light extends from the middle of the eardrum to the periphery. The eardrum is what translates sound waves into physical motion. The eardrum moves with sound. Here is a video of the eardrum in motion when the patient is performing a Valsalva maneuver. A Valsalva maneuver is increasing the pressure in your mouth and nose by holding your nose closed and attempting to breath out against a closed mouth. This is what you do to relieve discomfort in an airplane during descent.

The next obvious structure is the malleus bone. This bone is attached to the eardrum and translates the movement of the eardrum to the inner ear via the chain of bones malleus, incus, stapes. These bones are commonly referred to as hammer, anvil and stirrup. There is fine vasculature present on the malleus. This is a normal finding. Besides being the first bone in the middle ear, the malleus also “tells” you which ear you are looking at. The malleus always points towards the face. Here are examples of left and right ears with the malleus indicating which is which. Using the malleus as an orientation for ear laterality

Just like the person, every ear is different. In some ears it is possible to see additional structures that are in the middle ear (the other side of the eardrum). This is possible because the eardrum can be quite transparent. It is common to be able to see the incus bone. The incus is the second bone in the chain of bones that communicate movement of the eardrum to the inner ear. The malleus bone and the incus bone are connected in the top part of the ear. The malleus and incus bones are connected

Another feature that is commonly seen is the shadow of the tympanic cavity which is where the Eustachian tube is located. This is in the anterior-inferior portion of the eardrum. For the eardrum to vibrate properly from sound waves, the pressure on both sides of the eardrum must be the same. This is accomplished by the eustachian tube which connects the middle ear to the posterior nasal cavity.

Pressure equalization system of the ear
Most of us have had the experience of “popping’ our ears when descending in an ear plane. This maneuver is opening the Eustachian tube and allowing the pressure on both sides of the eardrum to equalize. The Eustachian tube can become inflamed and unable to “open.” This causes ear pain from unequal pressure that is often confused with acute otitis media. Tympanic cavity shadow behind the eardrum