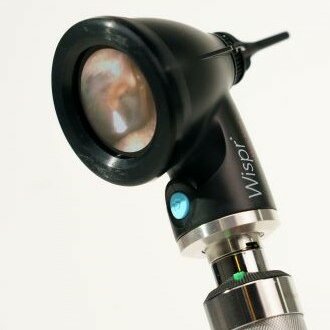 Why is the Wispr digital otoscope $1495?

We know you are considering a major purchase, and we’d like to tell you about everything that went into making the Wispr. There is a great deal of technology that was invented for your Wispr along with the engineering required to implement that technology.

In development of the Wispr digital otoscope, we started from scratch in thinking about ear exams. We made a list of the things the device had to be able to do if it was going to make a difference over traditional otoscopy;

We quickly found that meeting any one of those objectives was easy, but that meeting all of them was challenging. In addition, there are many tradeoffs that we had to consider. For example, a small camera has a lower resolution, but provides better access to the eardrum. It took us 6 years, untold hours, and millions of dollars to develop the Wispr to the point where we were proud to bring it to your clinic.

If you would like to know more about how the WiscMed Wispr compares to other digital otoscopes, please see our review article on Wispr University.

Size and the optical system

The camera in the Wispr is specialized for the medical industry. It is 1 mm on a side and features a resolution of 249 x 249 pixels giving an image size of 0.5 MB. Because the camera is so small, it requires a lot of light. This was one of our first challenges; how do we keep the device small while giving the camera enough light? If we were to place LEDs around the camera, the size would become too large, and LEDs get too hot to be used in the sensitive ear canal. Our solution was to use fiber strands to surround the camera and bring light from a distant LED. There are almost 800 fiber strands surrounding the camera in a tube just a bit bigger than 2 mm. Each of the fiber strands is smaller than a human hair. We package the light, camera and fiber strands in a unit called the Optics Module Adapter (OMA) that is removable from the body of the Wispr. Because the OMA is field removable, we can provide customers with upgraded capabilities with little disruption when they are available. An important design feature of the OMA is that the camera is at the very end of the “barrel.” This places the camera in the optimal position to be able to “see” the entire ear drum, even in cases of partial obstruction from wax. Camera at the end of the optics module barrel

The display and user interface

Built-in to the Wispr is a round LCD touch screen. The round screen reflects the round geometry of the eardrum.  The touch screen displays the live image and also provides the capability of reviewing previously stored images. An intuitive user interface was implemented for navigating the features of the device. We borrowed features of the user interface from common consumer devices such as smart phones. There is both video and still image capability. The video capability was particularly difficult to implement, but has the important benefit of getting the perfect look at a squirmy 3 month-old’s eardrum.

We also added a collection of whimsical images to entertain pediatric patients. This is part of pediatric mode which can be turned on or off.

The ear canal can be a high-humidity environment. A traditional analog otoscope does not fog because there are no optical components in the ear canal. In contrast, a digital otoscope with a camera at the end is very susceptible to fogging, not much different from your eye glasses fogging when you return to your warm home on a winter day. We considered a number of different approaches to this problem. Some digital otoscopes have LED lights at the tip that naturally heat the area and prevent fogging. The problem with this approach is that the LEDs make the tip large and uncomfortably hot after just a few seconds. Others have provided some internal or external way of heating the tip through resistive heating. Our approach was to find a permanent anti-fog coating. The antifog coating is applied directly to the lens of the nano camera. The result is an image that is free of fogging in all but the most severe cases.

Integration into your clinic environment

We know that for the Wispr to be useful, it can’t change your workflow or your approach to an exam.  It has to be just as convenient, familiar and accessible as what you currently have. The Wispr attaches to and gets power from the Welch Allyn or Heine handles in your clinic. One of the most challenging engineering problems was making the Wispr work with the handles found in your exam rooms. The mechanical connection was straight-forward and is used by many different vendors. The challenge was to reliably power the Wispr from different handles. Each type of handle has slightly different voltages, amperages and power ramp-up times. These challenges were addressed through power engineering and implemented in the electronics. The Wispr attaches to existing wall mounts and battery handles

A traditional analog otoscope is simply a light source and a magnifying glass. The light bulb in an analog otoscope is not sensitive to variations in voltage and amperage.  In contrast, the Wispr digital otoscope has many circuit boards, and like any computer, is sensitive to the power supplied. It took an exceptional amount of electrical engineering to make the Wispr work reliably with all of the different power sources that are found in the clinic and ordinarily meant to power a simple light bulb. Because we are physicians, we know how much abuse diagnostic equipment must endure. In the course of our work as emergency physicians, we’ve dropped traditional analog otoscopes hundreds of times and can’t recall them breaking. We know that our Wispr has to be tough enough to hold up to the clinical environment. The electronics inside the Wispr are held in an internal skeleton. The skeleton isolates external forces (such as from a drop) from the internal electronics. The LCD touch-screen is protected by a rubber bumper. The optics module adapter, the piece that supports the camera,  has some lateral “give” built-in. If it does become damaged, it is field replaceable. We often compare the Wispr to a smart phone. If dropped often enough, it will break. If that happens, we offer an exchange, no matter the damage, for a flat rate of $300. We’ve worked hard to make the Wispr intuitive to use. At the same time, we understand the importance of a comprehensive instruction manual. We have taken the time to assemble a manual that goes over every aspect of installing, using and maintaining the Wispr.

The WiscMed Wispr digital otoscope is a Class I medical device. As part of the FDA dictated process for Class I medical devices, WiscMed maintains extensive records relating to the conception, design and implementation of the device. In addition, our vendors have all passed the required audits related to medical device manufacturing. We had extensive third party testing performed on the device to make sure the Wispr is safe to operate in the clinical environment. We follow stringent processes for any changes we make to the device. We have systems in place to monitor and report any adverse events from the use of our device.

The Wispr was conceived and invented in Madison, Wisconsin by emergency physicians Drs Berbee, Rebella and Hamedani of the University of Wisconsin BerbeeWalsh Department of Emergency Medicine. Our engineers are in Arlington, VA.  The Wispr is primarily manufactured in Omaha, Nebraska with specialty components made in Florida, Connecticut and Michigan. We could have reduced the cost of the device by about 15% if we had used overseas manufacturing. We felt that it was important to build the Wispr in the United States. There are two reasons for this. First is that it is easier for us to visit and communicate with our partners. This was particularly important during initial development as we had a number of issues with building Wisprs that required close collaboration with all partners. Second is that we are proud to make this device in the United States. The conception, engineering, development, marketing, sale and support of this device requires a large number of talented Americans.

We have built the Wispr to be a serious clinical tool. That means that when you have problems or questions about the device, you expect immediate help. We have a customer support organization based in Madison, Wisconsin that includes live support via either the phone, chat or email. This support is available at no charge during extended business hours. If you have a question, we will get you the answer. If you have a problem, we will fix it. We will provide updates to the software free of charge.  We are proud of the positive feedback and reviews we receive from our customers. Maintaining a support structure where there are knowledgeable people to answer your questions quickly is expensive. We don’t want to be part of any other kind of company. You can reach us at 608.729.7234 or wiscmedsupport@wiscmed.com.