New Price for the Wispr Otoscope! Only $995!

The Quadrants of the Tympanic Membrane and Their Significance 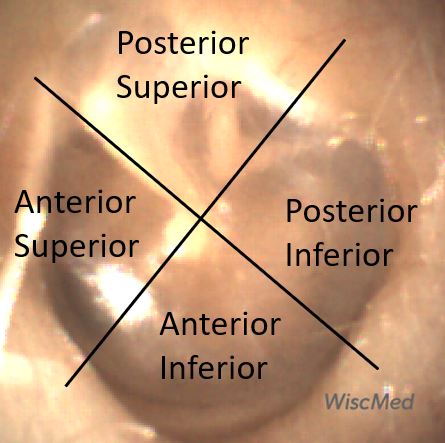 Understanding the quadrants of the tympanic membrane (TM, ear drum) is useful to know where to look for certain features. For example, infections often first present as bulging in the pars flaccida which is contained mostly in the posterior superior quadrant. The shadow of the eustachian tube orifice is commonly seen in the anterior superior quadrant.

Identifying the quadrants proceeds by drawing a line through the malleus. Since we now know that this is the left ear, this line separates anterior (front) from posterior (back). The next step in identifying the quadrants is to locate the umbo of the malleus. At the umbo a line is drawn perpendicular to the previous line separating anterior from posterior. This new line separates superior from inferior. We now have all four quadrants of the TM identified. Now that the quadrants have been identified, the significance of each quadrant can be discussed.

Posterior Superior
This quadrant contains most of the pars flaccida portion of the tympanic membrane. This is the “looser” portion of the membrane that forms the “roof.” This is the area where middle ear pressure in the form of bulging is first evident, for example in acute otitis media. The posterior superior quadrant also contains the incus bone and the stapes bone. Sometimes the chordi tempani nerve can also be seen in this quadrant. This quadrant is where it is easiest to see TM movement when a patient performs a Valsalva maneuver. Ventilation tubes are not placed in this quadrant because of risk of damage to the ossicles and chorda tympani nerve.

Anterior Inferior
This quadrant is entirely made up of the pars tensa. The promontory of the middle ear space is located approximately between this quadrant and the posterior inferior quadrant. The promontory is the outer rounded bulge from the cochlea.

Posterior Inferior
This quadrant is entirely made up of the pars tensa. The promontory of the middle ear spaces is located approximately between this quadrant and the anterior inferior quadrant. Part of the stapes ossicle terminates at the oval window behind this portion of the TM. This is also a quadrant to avoid when placing ventilation tubes.

Complete your name and email to read the content.
Unlock Content
Initial Diagnosis and Resolution of Acute Otitis Media (AOM) in Images
Traditional vs. Digital Otoscopy: 9 out of 10 Emergency Physicians Prefer the Wispr Digital Otoscope