9 out of 10 physicians prefer the Wispr Digital Otoscope!  Learn More > A normal ear anatomy presentation by Dr. James Berbee, one of the inventors of the Wispr digital otoscope and founder of WiscMed. The presentation focus is on the features of an eardrum and middle ear that can be seen with digital otoscopy using the Wispr.  The PowerPoint video is here and a written discussion is below.  Receive Wispr Clinical Cases emails by subscribing to WiscMed email updates. The WiscMed Wispr digital otoscope is a tool that every provider can use to improve their ability to access and interpret findings in the ear. The device can be purchased here.

What parts of the ear can you see with an otoscope?

The PowerPoint can be downloaded by clicking here.

WiscMed recommends that you watch the video presentation above. This contains the same information with more description and context.

The human ear is an example of nature’s amazing bioengineering. It translates sound waves first into mechanical motion and then into electrical signals that are interpreted as sound by the brain. The otoscope can “see” the tympanic membrane (eardrum) which separates the external ear from the middle ear. Because the eardrum is thin and translucent, it is possible to see some of the structures of the middle ear. These structures include the bones of the middle ear along with the tympanic cavity. Understanding what a normal eardrum looks like will allow you to appreciate when something is not normal. Orientation of the ear compartments

In this article, we will show you the features of the normal ear that you can expect to see during otoscopy. All the images and videos shown are from the WiscMed Wispr digital otoscope. To see the features, you must be able to obtain a view of the tympanic membrane (eardrum). The eardrum is located about 1.5 cm inside the skull at the end of the external auditory canal. The canal is rigid (surrounded by bone and cartilage), but it is not straight.  Features of the Wispr digital otoscope.

The canal often has ear wax (medical term, cerumen) that either partially or completely obstructs the view of the eardrum. The first challenge is to navigate through the external canal and past the ear wax. Below is a typical view that you might get with a traditional otoscope. Only a small portion of the eardrum is visible because the ear canal is partially occluded by ear wax. No definitive statement may be made about the eardrum because such a small portion is visible. To properly see the entire eardrum, either the ear wax must be removed, or you need to use a digital otoscope like the WiscMed Wispr that allows you to guide a camera around the wax. Removing ear wax for the inexperienced provider is challenging. This is because 1) the small canal limits visibility, 2) the canal is sensitive, and 3) there is risk of damaging the eardrum without good situational awareness. A better alternative is to have an otoscope that is capable of maneuvering through a small “window” in the wax. Here is a video from the WiscMed Wispr digital otoscope that incorporates a distal camera that is able to maneuver past wax;

Once you obtain a view of the tympanic membrane, you can begin to appreciate the anatomy that is apparent. Primary Features of the Eardrum Let’s start with the features that are readily observable. The first thing you notice is the large circular area. This is the tympanic membrane (eardrum) and is often described as pearly gray. In an adult, the eardrum is about 1 cm in diameter. A healthy eardrum is concave inwards. The cone of light is seen on a healthy eardrum – it is from otoscope light reflected from the concave surface. The cone of light extends from the middle of the eardrum to the periphery.

The next obvious structure is the malleus bone. This bone is attached to the eardrum and translates the movement of the eardrum to the inner ear via the chain of bones malleus, incus, stapes. These bones are commonly referred to as hammer, anvil and stirrup.

There is fine vasculature present on the malleus. This is a normal finding. Besides being the first bone in the middle ear, the malleus also “tells” you which ear you are looking at. The malleus always points towards the face. Here are examples of left and right ears with the malleus indicating which is which. Using the malleus to determine “which ear”

Parts of the Tympanic Membrane

There are two distinct areas to the tympanic membrane (eardrum), the pars tensa and the pars flaccida.

These two areas are outlined in the following images: 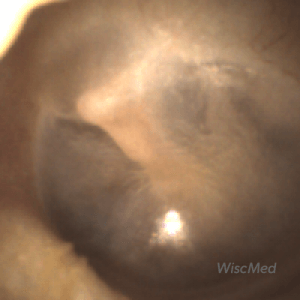 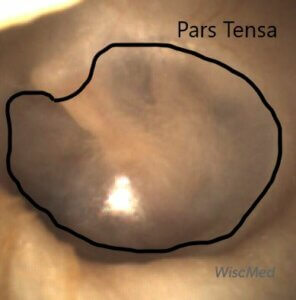 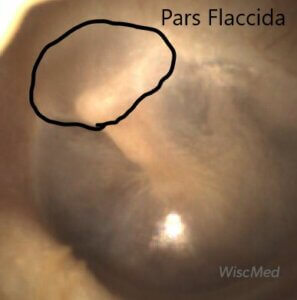 The pars tensa is the portion of the tympanic membrane that is the largest. It’s what people tend to think of when they think of the “eardrum.” As the name suggests, it is “taut,” much like if you stretched plastic wrap on top of a bowl. You could also imagine the pars tensa to be similar to a drum surface. It is the portion of the eardrum responsible for translating sound waves into mechanical movement.

The pars flaccida, as the name suggests, is less “taut” and also thicker. It drapes across the superior portion of the malleus. Although it does not have an active role in sound wave transcription, it is necessary to provide complete coverage of the middle ear space and allow for the proper functioning of the pars tensa.

From a clinical perspective, the pars tensa gets most of our attention. This is the place where we would expect to see perforations, effusions, and the characteristic bulging of acute otitis media.  See our Clinical Cases using the Wispr digital otoscope.

The pars flaccida may be the first place that bulging of the tympanic membrane is seen due to increased pressure in the middle ear space. The pars flaccida is where most eardrum movement would be appreciated if evaluating mobility of the eardrum via either pneumatic otoscopy or a Valsalva maneuver.

Bones of the Middle Ear Bones of the middle ear

Just like the person, every ear is different. In some ears it is possible to see additional structures that are in the middle ear (the other side of the eardrum). This is possible because the eardrum can be quite transparent. We’ve already talked about the malleus bone which is almost always visible.  It is also common to be able to see the incus bone. The incus is the second bone in the chain of bones that communicate movement of the eardrum to the inner ear. The malleus bone and the incus bone are connected at the superior portion of the middle ear. It is rare to see the stapes bone because it is so deep to the eardrum. The malleus and incus bones as seen through the transparent eardrum Occasionally it is possible to see the Stapes bone which is the deepest in the middle ear space. Surprisingly, the function of this nerve has nothing to do with the ear, it simply traverses the middle ear space where on occasion it can be seen behind a transparent eardrum as in this case. The nerve is a branch of the facial nerve and provides sensation to the anterior two-thirds of the tongue. It also provides parasympathetic fibers that provide motor innervation to the submandibular and sublingual glands.

Another feature that is commonly seen is the shadow of the tympanic cavity; this is where the Eustachian tube is located. This is in the anterior-inferior portion of the eardrum. For the eardrum to vibrate properly from sound waves, the pressure on both sides of the eardrum most be the same. This is accomplished by the eustachian tube which connects the middle ear to the posterior nasal cavity. Tympanic cavity shadow behind the eardrum

Summary of common findings on a normal eardrum Otoscopy findings of a normal eardrum

For more information about Normal Ear Anatomy as Seen by an Otoscope Video Presentation contact us. Check out the WiscMed Youtube Channel.