25% OFF Wispr Otoscope. Use Coupon Code ‘WISPR25′. While Supplies Last. 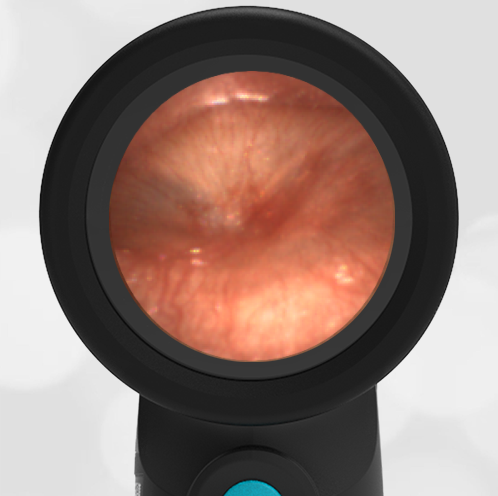 In Seeing is Believing Part 1, we discussed the challenges associated with traditional otoscopy that have contributed to confusion and inconsistent practice among clinicians when evaluating middle ear conditions. These challenges primarily result from limitations in obtaining adequate view of the tympanic membrane (TM) resulting in fleeting and/or incomplete view of the area of interest. However, with the advancement of digital otoscopy, healthcare providers now have a tool which can quickly provide a diagnostic image that may be used for both clinical decision-making as well as education. In Part 2, we turn to the evidence behind the AAP recommendations for diagnosing acute otitis media (AOM) on physical exam. In particular we will address the following questions with the answers providing much of the framework for the AAP’s current guideline:

1. How strong is the evidence for “bulging” as a physical indicator of AOM?
2. How do we recognize “bulging” on physical examination?
3. What is the strength of evidence for other physical signs and symptoms?

To begin an examination of the evidence, let’s first perform a quick review of a very clinically useful statistical measure, the likelihood ratio. Likelihood ratios (LR) are used to assess 1) The potential strength of a particular diagnostic test or physical finding and, 2) How likely your patient has the disease in question. LRs combine sensitivity and specificity to yield a numerical value that may then be used to calculate the post-test probability of a condition by plotting it on the Fagan nomogram or simply entering the value into one of a variety of online med calculators (see Figure 1). In practice, LRs greater than ten typically yield enough change in post-test probability to influence decision-making. But lest one feel uncomfortable that such statistical analysis removes the “art of medicine”, a key component to utilizing LRs is the need to first determine the pre-test probability that your patient has the condition. This determination is technically the disease prevalence in a population but is altered by numerous factors, including those based on clinician experience. For example, a pediatrician’s recognition of a particular risk factor, her intimate knowledge of the patient’s past medical history, or the presence of additional symptoms and physical findings may all impact this initial impression. Thus, the physician uses her knowledge of the condition prevalence as well as the entirety of the patient presentation to estimate the pre-test probability. She then applies the test/physical finding LR to determine the post-test probability and decides if this meets her threshold for treatment. It’s simple, elegant, and clinically applicable to our discussion of middle ear findings.

How strong is the evidence for “bulging” as a physical indicator of AOM?
Let’s turn to the first question addressing the strength of evidence for bulging of the TM as an indicator of AOM. Clearly the panel of experts in the AAP feel this physical finding is important. In fact, bulging as a sign of both acute inflammation and middle ear effusion (MEE) has been recognized as a defining characteristic of AOM for well over a century with numerous publications supporting its significance. A 2003 JAMA review of these investigations calculated the LR for TM bulging to be an impressive 51.0 (95% CI 36.0 -73.0). As depicted in the nomogram below, if one uses a baseline prevalence of 20% among children (estimate from the National Ambulatory Medical Care Survey), the probability of AOM in the child with bulging TM increases to 93% (95% CI 90-95%). To put this in perspective, if one was to hypothesize a medical device—perhaps one that uses infrared technology, ultrasound, or other advanced imaging to diagnose AOM from middle ear interrogation, such a device would need to be 100% sensitive AND at least 98% specific to achieve the same result as the simple physical finding of bulging. The conclusion is clear…when bulging is present, the diagnostic certainty for AOM  is very high. 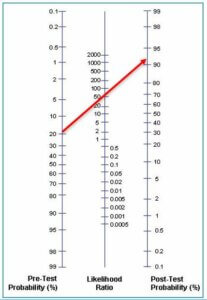 How do we recognize “bulging” on physical examination?
While advanced digital otoscopy offers the clinician ample time to view physical findings, there remains the fact that “bulging” occurs on a continuum and adds an element of subjectivity into the assessment. Fortunately, the AAP definitions have reduced the impact of this subjectivity by dichotomizing TM bulging into mild versus moderate/severe. Additionally, there are two anatomic features of the TM that help clinicians identify into which end of the spectrum to classify their findings. The first characteristic is the attachment of the malleus to the medial surface of the TM with the umbo acting as a fixed point located at the center of the membrane. The second characteristic is the greater compliance of the pars flaccida in the posterosuperior portion of the TM. As a result of these features, mild bulging (often referred to as “fullness”) appears in the early stages of MEE and inflammation as bulging of the upper portion of the membrane, obscuring the handle of the malleus and giving the umbo the appearance of a shallow dimple in the central TM. With progression of bulging to moderate or severe, the membrane will increasingly protrude outward around this fixed point, with the TM taking on the shape of a donut, bagel, or overblown innertube. In the most severe cases, there may be localized pointing—indicating the TM is about to rupture at a weak spot. The following are examples of these middle ear conditions. All images from a WiscMed Wispr digital otoscope. 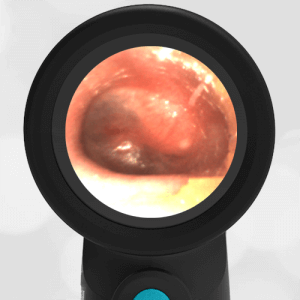 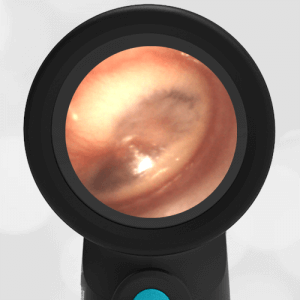 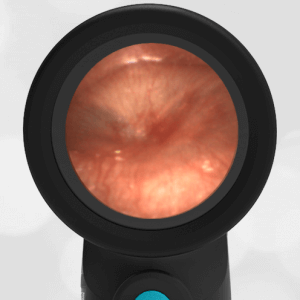 What is the strength of evidence for other physical signs and symptoms?
As can be seen in the above images, with a little practice and sufficient time to review an image, determining moderate or severe bulging ought to be obvious (we ask our trainees if the TM “looks like a bagel”). In these instances, one can most confidently apply the reported LR for bulging to the individual patient. However, when bulging is less impressive, this confidence may not be as high—at the very best, one would be inclined to assign a LR on the lower end of the 95% confidence interval. If we err on the side of conservative estimates and assign a LR of 30 (which is even below the lowest 95% CI endpoint of 36.0), mild bulging alone would yield a post-test probability for AOM of 88%. In these cases, the AAP recommendation is to look for other signs and symptoms that support the diagnosis of AOM, specifically evidence of pain or intense erythema of the TM.

Turning to the final question and examining the available LRs for ear pain and distinct erythema of the membrane, we can again reference the JAMA review. Ear pain alone was found to have LRs in the range of 3.0 to 7.1 (95% CI 2.1 to 12.1) and ear rubbing as an indicator of pain in preverbal children yielded LR of 3.3 (95% CI 2.1 to 5.1). Recalling that a LR of greater than 10 generally results in clinically meaningful change in the post-test probability, these LRs may at first seem less helpful. Indeed, when plotted on the Fagan nomogram, the post-test probability is only raised to approximately 43% to 65%. However, what this actually confirms is something most of us already recognize–that as a single symptom, one cannot rely on ear pain to make a diagnosis of AOM since there are a host of other conditions that can cause ear pain. But if we instead use the presence of ear pain to raise our suspicion and thus pre-test probability, we can appreciate the impact this symptom has on the “mild bulging” cases in the following example:

Using the very lowest end LR for ear pain or ear tugging (2.1), ear pain increases the probability of AOM to 34%. Taking this into account, the clinician could now reasonably use this knowledge to increase the pre-test estimate of AOM from the baseline 20% to a higher 30% probability for AOM*. If the ear exam reveals mild bulging as evidenced by fullness in the superior TM and distortion of the malleus landmarks, one could determine to again apply the very lowest end of the LR for bulging (36.0). The resulting post-test probability for AOM is 94%–an impressive degree of certainty in the diagnosis.

Similarly, using the low-end estimate for intense erythema with a reported LR of 8.4 (95% CI 6.7 to 11), the resulting probability for AOM is only 63%. This is certainly not definitive, so congratulate yourself if you have ever informed a trainee that “a red TM” is not sufficient for diagnosing AOM! But if we use the presence of distinct erythema to conservatively raise our estimated probability from the baseline 20% to 50%, then the presence of mild bulging results in a post-test probability of 97%. In this case, the additional information obtained during the physical exam provided enough supporting evidence to make a reliable diagnosis when applying the AAP recommendations.

Summary
The diagnosis of AOM has long been a source of confusion for many of us resulting in inconsistent practice, over-prescription of antibiotics, and wasted healthcare dollars. With its most recent update, the AAP has greatly minimized this confusion by relying on the strong clinical evidence for bulging as a primary indicator for AOM, augmented by ear pain or distinct erythema when bulging is not quite as obvious. While there may be other constellations of signs and symptoms that warrant treatment or close observation for progression of symptoms, the academy’s recommendations greatly simplify the diagnosis. And when combined with recent advancements in digital otoscopy, this evidence-based approach takes the guesswork out of the diagnosis and allows clinicians to believe what they see.

*When using multiple LRs, it should be noted that it is unclear whether it is acceptable to simply add LRs from two or more different findings to generate a single LR. From a practical standpoint, it seems reasonable that if a patient has two findings, the post-test probability will be greater than if they only had one finding. To minimize overestimation of the combined impact of findings (and for the sake of clarity), I have chosen conservative estimates that are lower than the sum of two LRs and applied them sequentially.

Complete your name and email to read the content.
Unlock Content
Seeing is Believing Part 1 – Challenges to Improving Diagnostic Accuracy
Acute Otitis Media (AOM) – a spectrum of images from normal to AOM